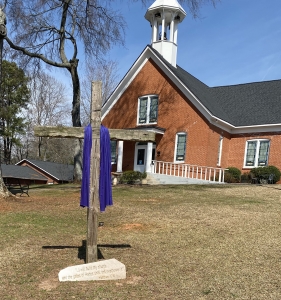 Jesus entered the city on a high note only to be found weeping at the end of the week. Before the week was over, he would have overturned tables in the temple upsetting the religious power brokers of the day.  He would have also unsettled his closest followers not only by humbly washing their feet. But also in foreshadowing his betrayal by Judas and abandonment by Peter which comes to pass as he is warming himself near a fire having followed Jesus from the shadows as he was arrested by the religious leaders in the dark of night.  (Get the full details: John 18:15-27)

Imagine that as the rooster begins to crow, Peter was taken back to just hours before where he shared a meal with Jesus.  And not just any meal, but the Passover meal, which would become the sacrament of Holy Communion for Christians. to remind us of God’s deep love for us. How do you think that sound made Peter feel?   Have you ever heard the “cockcrow”  because of something you did or said that betrayed everything Christ taught? Everything that Jesus died for? Have you ever asked God to forgive you for whatever that betrayal was? Don’t you think it’s time you let that go and come in from the shadows?

THE JOURNEY CONTINUES…The journey doesn’t end tonight, it continues as we invite you to join us at Hillside UMC and The Way for several other gatherings this weekend.  Join us tomorrow to reflect on the selfless and sacrificial death of Jesus at one of our Good Friday services. On Sunday we invite you to worship at one of our campuses or online as we celebrate and lay claim to the Good News of Jesus having risen from the dead!  Times and locations can be found below.